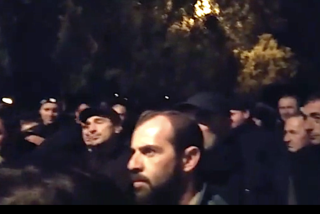 President Raul Khajimba has refused to leave office, and protesters refuse to leave the presidential administration building, which they seized on January 9

The parliament of Abkhazia on the evening of January 9 asked President Raul Khajimba to resign in order to avoid an escalation of the political conflict.

19 MPs of 25 present voted in favour of asking Khajimba to resign. There are 35 deputies in the parliament of Abkhazia

The opposition has been demanding the resignation of the president from September 8, 2018, when the second round of the presidential election was held in Abkhazia and, following its results, Raul Khajimba won by a tiny margin..

The main argument of the opposition is that Khajimba won only 47 percent of the vote in the second round, while the law requires 50 percent +1 of the total number of voters. Therefore, the opposition demands that the election results be deemed illegitimate, the president resign and new presidential elections be scheduled.

On January 9, the situation escalated when close to 1000 people stormed the presidential administration building.

On this day, a meeting of the Supreme Court was to take place to make a final decision on the lawsuit of the opposition. However, the opposition demanded the removal of one of the judges – Roman Kvarchia. His candidacy was proposed by the president, and the opposition says he cannot be considered unbiased.

Therefore, more than a thousand opposition supporters initially besieged the presidential palace in Abkhazia, then knocked out the doors and broke through.

The opposition party Aitaira, the leader of which is influential politician, former president of Abkhazia Alexander Ankvab, called on the president to resign to defuse the situation.

The Supreme Court agreed on the same day to replace the judge. Now, within two months, a new composition of the cassation instance should be formed, after which the opposition’s claim on declaring the presidential election invalid and the calling of new elections will be reconsidered.

However, the opposition decided not to vacate the presidential administration building until Raul Khajimba announced his resignation. Also, the protesters at the parliament refused to disperse.

The president is in another residence, known as the “state dacha”. During preliminary negotiations with a group of MPs, he refused to resign.

Against the backdrop of the crisis in Abkhazia, may recall the similar events of May 27, 2014. That day, under the pressure of a rally of many thousands that grew into an assault on the presidential palace, then-President Alexander Ankvab was first forced to hide out at a Russian military base in Gudauta, and four days later officially resigned.

The peculiarity of the current situation is that the leader of that rebellious opposition in 2014 was Raul Khajimba himself, the current president of Abkhazia.

And one of the most influential opposition leaders today is then-President Alexander Ankvab.
https://jam-news.net